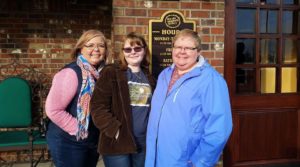 When it comes to being a birthparent, I have always had some anxiety when it came to meeting new people who do not know my adoption journey. I mean, what do you say when someone asks if you have kids? This is something I have always struggled with and have responded different ways. Sometimes I will say, “Yes, I do and she is <enter age>.” I then try to move the conversation to something else.

Other responses have been: “No I don’t have kids, but I do have 2 border collies”, “No, no kids right now”, or if one sees a photo of Lil Miss and I the response to “Is that your daughter?” is “No she is my niece.” It is just easier to respond in this manner until I get to know the person a little bit better. The anxious feeling of telling someone that I placed a child into an open adoption could possibly be on the same level of someone in the LGBTQ community acknowledging their sexual orientation to people that they have just met or have only known for a short time. It is a private thing that not everyone needs to know right away. I don’t like to have the uncomfortable silence or the uncomfortable pause with then the response of, “Oh well that is cool” then the rest of the initial social interaction becomes awkward. Everyone who has been touched by adoption have had to answer questions like these. My mom has been asked how many grandchildren she has, and she will normally say that she has 4 but my oldest daughter placed her daughter into an open adoption and we see her about once a year. These “new social interaction” situations happen to all of us.